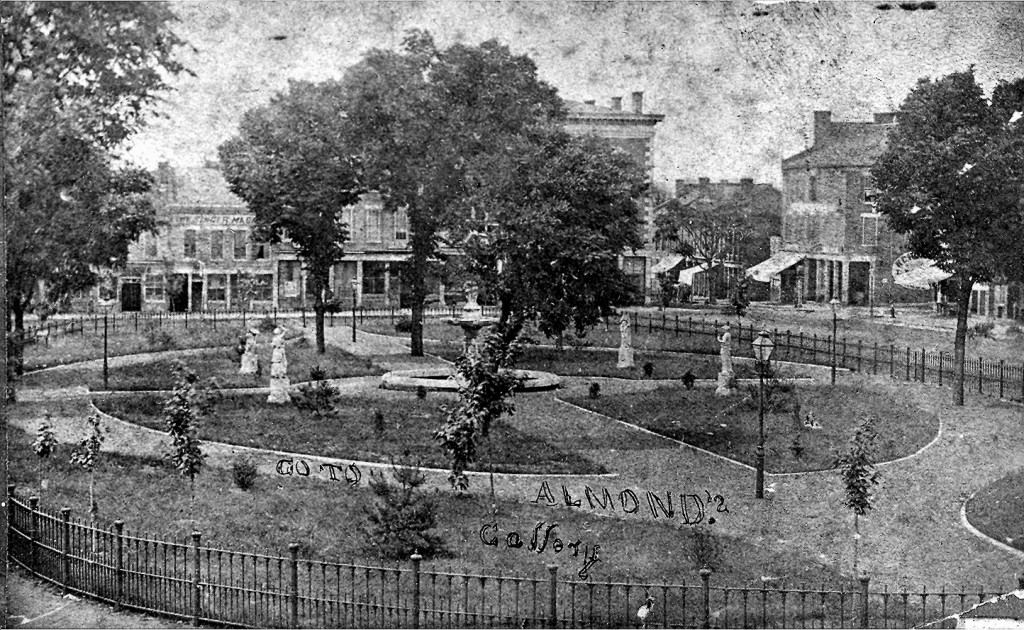 Fountain Square - prohibitionists have marched around it, trolleys have encircled it, parades of all types-circus, military, historical, homecoming, Irish, political and patriotic- have taken place around it, scrap drives headquartered here, Civil War soldiers knew this place, hundreds of farm animals have been sold here as well as fine horses, pageants have been held here, veterans were welcomed home here, people have sold and traded every kind of item imaginable here, and buildings here have come and gone. No one familiar with local history can deny that Fountain Square is Bowling Green's touchstone to its past; it is certainly the community's most endearing and enduring landmark.

Robert Moore, one of the area's earliest citizens, donated two acres to Warren County for public buildings in 1797. On this site a log courthouse was erected, and shortly thereafter the county added a log jail, a stock and pillory, a log clerk's office and a log market house. Around 1813 a new red brick courthouse was erected and crowned with a white cupola

After the Civil war, county citizens made demands for a new courthouse. It is unclear why it was not erected on this site, but the city purchased a lot on the corner of Plain and Bridge Streets (10th and College) and traded that property for the old square.

A consensus was reached to create a park out of the old square. However work had to await the completion of the new courthouse. The sale of $6,000 in bonds financed the park project. John Cox Underwood, an architect/engineer and the second mayor of Bowling Green, drew up a plan for the park in 1870. Underwood had planned to have the park extend from Main Street to the new courthouse (occupying all of present Frozen Row or Park Row), but limited funds reduced the grandiose scheme to the present park site.

Charles Ott, a local stone mason who carved one of the Corinthian columns on the new courthouse, was given the contract to build a two-tiered limestone fountain and reflection pool. A portion of the original fountain is now on display on the back lawn of Historic Riverview at Hobson Grove.

In March 1872, the sexton from Fairview Cemetery was employed to plant trees and shrubs in the park. In April the new fountain and four statues representing the four seasons were placed in the park, and on April 23 the water was turned on. In early May 1872 the city's trustees officially christen the area "Fountain Park.

At the park's dedication, Henry Watterson, the editor of the Louisville Courier-Journal, applauded the City's new common, calling it an "enchanting green gem." He further lauded Bowling Green's new courthouse, new waterworks, new cemetery and new roads and bridges. Watterson praised the beauty of the new park and toasted: "May its grass never be stained or blighted. May the music of its fountain...be always the music of peace and love. A thing of beauty is a joy forever.

Within less than ten years, the fountain had deteriorated to the point that it had to be replace. In 1881 the city trustees, in consultation with Mayor H.C. Hines, purchased a 6,000 pound precast fountain from the J.L. Mott Ironworks of New York City for $1,500. The new piece was crowned by Antonio Canova's (the original sculptor) Hebe, the goddess of youth. The old fountain was disassembled and portions sold at auction, and the new one was installed in May 1881. Near identical fountains are located in Memphis, Tennessee's Court Square and in Montgomery, Alabama.

The statues surrounding the fountain represent the mythological figures of Ceres (goddess of grain), Pomona (goddess of fruit), Melpomene (goddess of tragedy) and Flora (goddess of flowers.) The Fiske Company of New York cast the four statues as well as the two urns at the east and west ends of the park. They are mounted on locally quarried limestone. At the north and south entrances to the park are two arched memorial entries also of Bowling Green limestone.

The lush greenery of the park is due in some part to the early efforts of the Bowling Green Garden Club. Shortly after it was chartered in 1934, the Garden Club commissioned R.L. Sturtevant, a prominent landscape architect from Groton, Massachusetts, to design a planting for the park. With city funding and numerous private contributions, this plan was implemented. Today the park is under the care of the Landscape Division of the Bowling Green Parks and Recreation Department.